A Class Letter on Fear 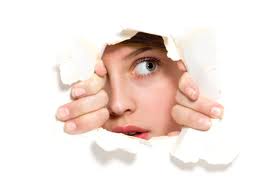 I've been working for some time on a novel about the monthly letters I wrote to my classes when I taught high school English. I wanted them to think about the adults they wanted to become.

Since tomorrow is October 1st, I wanted to share one of the October letters with you. Read on:

Let’s look at a couple to give you an idea of what I mean.  One is a fear of failure.  Nobody likes to fail, right?  But failure is a normal part of life.  We can’t all be good at everything we do.  It’s OK, even necessary, to fail in order to learn something from the failure or find another way to do something.  But sometimes, a fear of failure can keep us from trying anything at all.

A similar fear is that of not being good enough.  When I was in college, my school offered a junior year abroad program.  I figured my grades wouldn’t be good enough so I didn’t even apply.  I could have spent a year in , or – a whole year! – but my fears held me back.  Dumb, huh??

What about fear of success?  That doesn’t make sense.  Who doesn’t want to succeed?  Well, there are some people who don’t.  Maybe they think they don’t deserve it, or that if they succeed then other people will expect it from them all the time, or that they will no longer fit in with their friends if they do.  Maybe they have carefully cultivated an image of not being smart or capable in order to fit in.  Sometimes people “dumb down” to achieve this “goal.”

Did you ever see the movie Stand and Deliver? It’s about a group of kids, mostly from gangs and the projects, who didn’t think they could learn calculus.  Lou Diamond Phillips’ character was really smart but didn’t want to act like it in front of his homeboys. He was afraid that if he succeeded they wouldn’t like him anymore. Eventually he overcame his fear of success and passed the AP Calculus test.

The example from my college days is just one example from my own life.  I have made many decisions based on fear and they have ALWAYS come back to haunt me.  One time, I got into a bad relationship with a guy because I was afraid to be alone.  Another time, I was afraid to spend a little bit of money to protect myself (an insurance thing) and it cost me thousands of dollars instead. Since then I have made a conscious effort to not make decisions based on fear.  I’ve heard it said that true courage is doing something in spite of the fear. Sometimes I still make decisions based on fear because I’m human but most of the time I try to simply walk through the situation with courage, in spite of the fear.

Another thing you can do to stay out of fear is to stay firmly rooted in the present.  99% of all fears are about the future – “what if?” kind of things. In my case, they were “what if my grades aren’t good enough?”, “what if I never find anyone else to love me?” and “what if I need that money next week?” Look at what you have in your life today, be grateful for it, and your fears of the future will dissipate or even disappear completely.

I’ve listed a few examples of fears you may have.  Can you think of any others?  What fears do you have that hold you back?  What can you to do overcome them?  How can you be courageous today?

This is a quiz grade and should be a page long.  Say whatever you like – there’s no right or wrong answer.  I’m interested in what you think about this.  Your letters are private between you and me (unless you reveal something that requires me to take it to a higher authority).  You don’t have to answer each of these questions individually; they are included to make you think.

How would you answer this letter? What are you afraid of?

P. S. If you're intrigued by this letter (and the book that resulted from the practice), you can either subscribe to the blog and receive the first three chapters free, or you can wait until the novel comes out later this year!