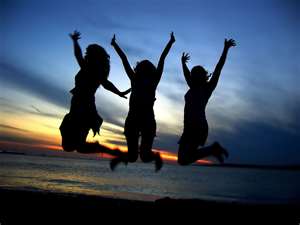 I went to real summer camp when I was a kid. No air conditioning, no en suite bathrooms. I had to walk to the casita (the bath house filled with Daddy Long Legs....like, to the ceiling) in the middle of the night. With a flashlight so bears wouldn't eat me (I'm pretty sure there are still bears in the Granbury, TX area, so watch out). And, of course, I had to shake out my shoes in case a scorpion crawled into one during the night before I could even go to the casita. With spiders. Like I said, real camp.

And because it was real camp, we sang camp songs -- all the time. I still remember most of them (although, nowadays, I frequently can't remember what I originally needed when I walk into a different room; I call this Roomnesia and I'm pretty sure I should be famous for discovering it. And rich). What was I saying? Oh yeah......  Here's one I remember:

Make new friends
But keep the old.
One is silver
And the other's gold.

I've been thinking about friends lately. I have friends that I've known since kindergarten, which was, like, two hundred and fifty six years ago. Some are more recent, of course. It's not like I've been on a desert island writing fabulous blog posts and working on my tan. I do get out every now and then.

I reconnected with a semi-old friend recently (circa 1970). The circumstances of the reunion aren't great, but the visits have been wonderful. I'll admit, there was a time I (briefly) hated her guts. We were going from 8th grade into 9th (ie high school --- yikes!). I was a cheerleader in 8th grade and tried out for a spot on the high school team (certain I would make it because of all my vast experience). So did she. On crutches. All she did was yell a lot. I yelled and jumped.....at the same time. I guess you just can't account for the sympathy vote (yeah, she won). But, because I was such a gracious, magnanimous person, I forgave her and we remained friends. Then I went away to boarding school my sophomore year, where I made new friends. But we would hang out together some when I came home on vacations, and we were debutantes together (yes, really) in college. Later on, we were busy raising families and lost touch. We'd run into each other at parties or restaurants, but never actually got together. Until recently.

It's interesting to hang out with old friends you haven't seen in awhile. You have a shared history that's comfortable and familiar, but there's this whole other life you've both lived in the meantime. Some of it has been awesome, some of it kinda sucky, and you wish you had been able to help somehow. And part of you wants to share all the dirty little secrets you've been hiding the past X years because that's what you used to do X years ago, but part of you realizes that, in some ways, this person is also sort of a stranger. It's really the best of both worlds -- familiarity and discovery, laughs about antics from the past and some new ones you've yet to experience. And it's way cool to see how we've "grown up" (not so much for my friends, because, well, I just haven't grown up that much....but I think you already knew that). I've enjoyed it and look forward to more times together. Maybe get into a little mischief too. It could happen.

I found some of my new friends via the blogshere. I've only been blogging since January, so they are really new friends. And we've never, like, actually, met. I mean, IRL (in real life, for those of you who are terribly out of touch. Don't you wish you were cool like me?). But I feel like I know the bloggers I follow, ya know? I probably have more information about The Bloggess than anyone else via her new book, Let's Pretend This Never Happened. I pre-ordered so I wouldn't have to fight somebody over one at the bookstore. And I'm actually going to meet her when she comes to Dallas on her book tour. Eeeeeeeeee!!

I've gotten to know other bloggers too and I can't wait to see what happens next in their lives. I've celebrated with Jules on her inspiring journey to the smoke-free world of smaller boobs (soooooo jealous on both counts). I've cried with courageous Lauren who has had such a difficult time lately, but always comes back with a smile....and cheese (and she's hilarious, but she really needs gemstones and babies, RYAN, to make everything OK). Lauren will also be in Dallas to meet Jenny and, if I recognize her, I truly hope that I don't scare the living shit outta her by, I dunno, maybe squealing and jumping up and down like a twelve year old at a boy band concert. Sorta undignified for a 54 year old, but not out of the realm of possibility, I'm sorry to say. Then there's RingFingerTanLine. I get vicarious dating thrills AND tempting recipes from her blog. Bob the Water Cat is hilarious; Metta Drum is deeply spiritual. I could go on, because there are some truly awesome, funny, transparent, real people  writing out there (not like there's mannequins or zombies writing the other blogs, but you get my drift, right?).

I love my friends...new and old, silver and gold. They're all priceless to me!

How do you keep in touch with old friends? Where do you find new ones?