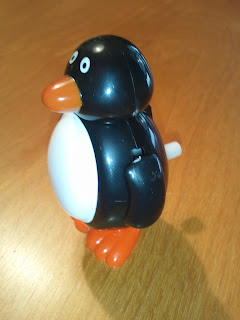 Santa delivered this lovely little penguin to The Husband this past Christmas. Yes, there IS a Santa. I have proof!

Proof before the post? Fine. Have it your way (you're acting really demanding today, by the way).

How I know Santa Claus exists:

When I was 7-ish, and my belief in Santa was waning, I received a sign. Directly from Santa himself. He knows everything, right? He's got that damn naughty/nice list so I really have to watch myself. He must have known I was losing faith, so he did something about it. On Christmas Eve, we had a fire, as usual, because my mother's side of the family had been over to celebrate and open some presents. On Christmas morning, I went into the living room and some of the ashes from the fireplace were on the floor. Upon closer inspection, it was clear that a shoe or black-Santa-style-boot (the obvious choice) came down from the chimney, landed in the ashes, and scattered them all over. My parents and brother were as amazed as I was.....and clueless as to the instigator. It was just the four of us in the house. I certainly didn't do it. My brother was just a toddler....and, frankly, not that bright. My parents both shrugged off any responsibility. Therefore, henceforth, and ergo, it HAD to be Santa. I rest my case.

Now, can we get on to the real topic at hand?? Thank you.

So, The Husband receives this cute little penguin in his stocking FROM SANTA (have I made myself clear?). It pooped little brown candies. We thought it best (and definitely more hilarious) if we waited for TMPCTEL before we put the penguin into action. TMPCTEL came over and brought his parents. It was penguin time! I secretly placed the brown candy in the appropriate slot and wound the penguin up. It waddled around and pooped the candy out of its little penguin ass. It was side-splitting. Of course, TMPCTEL loved it. What could be funnier to a six-year-old boy than a pooping penguin? For a minute anyway. Once he showed everyone how it worked, and consumed all the candy, the show was over. The magic was gone. No more penguin poop. No more penguin poop hilarity.

The Husband and I were playing a game with a friend, and related the story of the penguin (no, not a drinking game, as apropos as that may sound). So The Husband told our friend how the toy shit brown candy, but all the candy was gone.

Sheesh! I guess you had to have been there.....

Have you had a great experience that doesn't quite translate in the re-telling? Did you tell it anyway at the risk of looking like an idiot?