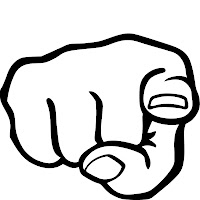 Many years ago, I was pretty good at playing the blame game. I could rationalize, minimize or justify almost anything....as long as it was your fault. After all, if I took responsibility for my actions it meant I might have to change something about me, which really wasn't an option.

I could tell you it was my parents' fault, or my teachers' or someone else, but that's blaming again, isn't it? The truth is that I was selfish and immature. Unfortunately, those qualities persisted long into adulthood, until I saw the truth about myself.

I was a victim....and really good at it. Then someone told me that if I have one finger pointed at someone else, there are three fingers pointing back at me. Ouch. When I realized what I was doing, I learned ways to alter that behavior.


One trick I wish I had had back then is a simple letter switch that I learned from Christie Inge. This is what she wrote:

Did you lose that job because your boss is a douche bag or because you were consistently late? Did you fail that test because your friends "made" you go out with them instead of study? Did your car break down because it's a piece of shit or because you didn't take care of business when the check engine light came on....six months ago? Did Josie get "your" promotion because she's a brown-noser or because you take thirty minute breaks and two hour lunches?

The first step is being honest with yourself. Really honest. You know the truth....deep down inside. If you truly can't see it, enlist the help of an objective, level-headed friend. Talk it over and be open to their observations and suggestions. Recognizing the victim stance can take some practice, especially if, like me, you've been "practicing" for a long time, but it can be done. Once you can see it, turn that thought around as Christie suggested. Just that one small shift can change everything!

Have you played the "blame game"? Are you a "past master" or still working on it?