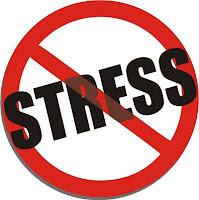 Birthdays and holidays are big deals for kids. They look forward to these events for weeks, and missing any party or celebration is catastrophic. Moving up the age ladder into the teenage years, angst issues encompass grades, boy/girlfriends, parents, cliques, you name it. Young adults stress over jobs, spouses, children, and of course, money.

Now that I have arrived at the ripe old age of 55, I find that there's not too much that stresses me out anymore. Yesterday was my birthday, and I woke up and 4 a.m. sick as a dog. We had plans to go to a fancy restaurant with friends which didn't happen, obviously. It wasn't worth getting all bent out of shape over....besides, I felt like shit. We have postponed until Sunday, expanded the party and changed locations. But I'll be with the people I love, and that's all that matters. The fact that the celebration isn't taking place on "the day" isn't nearly as important as the get together.

But I see many people upset about things that aren't in their control. Got a flat? Don't kick the tire and send your blood pressure through the roof. Do what's in front of you to do (change the tire.....or call The Husband to do it!) and move forward. It's a hassle and an inconvenience, but it's not the end of the world. Ask yourself, how important is it? Many times, I get wound up over something that's no big deal. When I stop and think about it, and realize its insignificance, I can let it go and move on to the next task at hand.

Sometimes I have to take responsibility for my actions rather than curse the fates. Run out of gas? If you were on empty, but thought you could make it anyway, whose fault is it, really? Late for an appointment? Don't blame traffic. Instead leave a little early (or on time!) to avoid such issues. Some people would rather play their victim card than take responsibility, but in doing so, they remain a prisoner of circumstances and hand their power over to those circumstances. Lose your job? Was it really because the boss "didn't like you," or because you had a bad attitude or didn't do a stellar job? Look at yourself first -- your motives and your actions -- to see if you have a part. Most of the time, if you're honest, you do.

One of the best ways I have found to deal with unexpected kinks is to simply have faith. I accept that I'm exactly where I'm supposed to be at that time. My faith tells me that God's plan and timing are perfect, and that good will come out of the situation at hand; all I have to do is look for it.

The Serenity Prayer is an excellent stress remedy. God grant me the serenity to accept the things I cannot change, the courage to change the things I can, and the wisdom to know the difference. Can you change the situation? Nope? Then let it go, and don't fret about it. If you can change it, do something; don't wallow in self-pity or find yourself frozen by fear. Take some action. If you need help in "knowing the difference," talk to a trusted friend to get objective feedback.

It may be trite, but life really is too short to stress!

In other news, the giveaway has ended and here are the winners:

Since Mana and Diana were the only two people to comment on the blog, they automatically win a prize. I had some people comment on Facebook, so they are entered as well (even though they didn't exactly follow directions!). The other two winners were Holly (who tried to follow directions, but was foiled by Firefox) and Sandy! I'll contact you about your prize!

Has stress overtaken your life? Or have you found ways to deal with it?