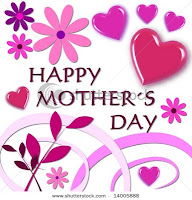 I have two biological children, which means I get to celebrate tomorrow. I told The Husband that I didn't want to cook anything or do any dishes. Anything else would be gravy.

Twenty-five years ago, I was a new mother to a precious daughter (a.k.a. Sweet Angel). She was born the day after Christmas and was about four months old for my first "official" Mother's Day. I adored her but I was terrified I'd break her. I obsessed about hurting her (unintentionally!). Now that I understand that thoughts become things, I did drop her, in a self-fulfilling prophesy. I was holding her (carefully) and she arched her back. Then she did this s-l-o-w motion back flip out of my hands, head-over-feet, and I'm standing there, in horror, watching. I swear it took minutes for her to reach the carpet....on her back....and just fine. Whew! She managed to live through the rest of her childhood as well, in spite of her bumbling mother.

Five years later, her brother (a.k.a. Sweet Boy) was born. He was an active baby from the get-go. My doctor had to hold him down to get an accurate sonogram. For a very long week, the doc and I thought he might be twins because there was so much movement. Trust me, one was enough. I nursed Sweet Angel until she weaned herself at seven months. It was always a lovely time of togetherness for us. She just laid there, calmly getting nourishment. My son, however, was like a puppy with a sock. He'd latch on and start wiggling and moving everywhere. In addition, I got mastitis -- twice. Anyone who's had it knows it's very painful. After my second infection, he went on the bottle. He, too, has survived to adulthood, I'm happy to report.


I also have a wonderful step-son who is great at everything; he shall be named The Superstar. He works for an airline and flies free so, although we are a couple of states apart, we get the pleasure of his company frequently. And, you've recently met The Princess.  Suffice it to say, I qualify for a day free of cooking and dishes (and if there were some flowers and chocolate thrown in.....well, I wouldn't complain. Just sayin'.)


Whether you're a biological mom, step-mom, mom-to-be, or surrogate mom, Happy Mother's Day!


Have you enjoyed and/or survived the joys and challenges of parenthood?


Have you been there?